The first thing to do is consider the goal, such as yoga for a cyclist who is trying to improve on their personal best time in an event. Imagine getting off the bike after a 200 kilometre race and then your yoga teacher wants to do a fierce session of standing postures. That’s not going to go down well and it isn’t going to help as much as a restorative type practice with slow stretches and inverted or reclining postures.

Yoga is for everybody and can be for everybody’s body but since bodies and minds are different, the yoga teacher is responsible for fine tuning and applying the practices. Sure, we can apply a generalised practice and that will have some benefit. But if you want to get the best out of yoga, it should be applied directly and specifically to needs.

As the yoga instructor, ask to find out the cyclist’s most important key goal and work towards achieving this. Yoga can support the achievement of that goal.

So we find out the cyclist’s goal. Some examples could be:

Yoga can be helpful to work towards these goals and but we may have to practice some discernment in the way that we apply it.

The anatomy of the cycling position 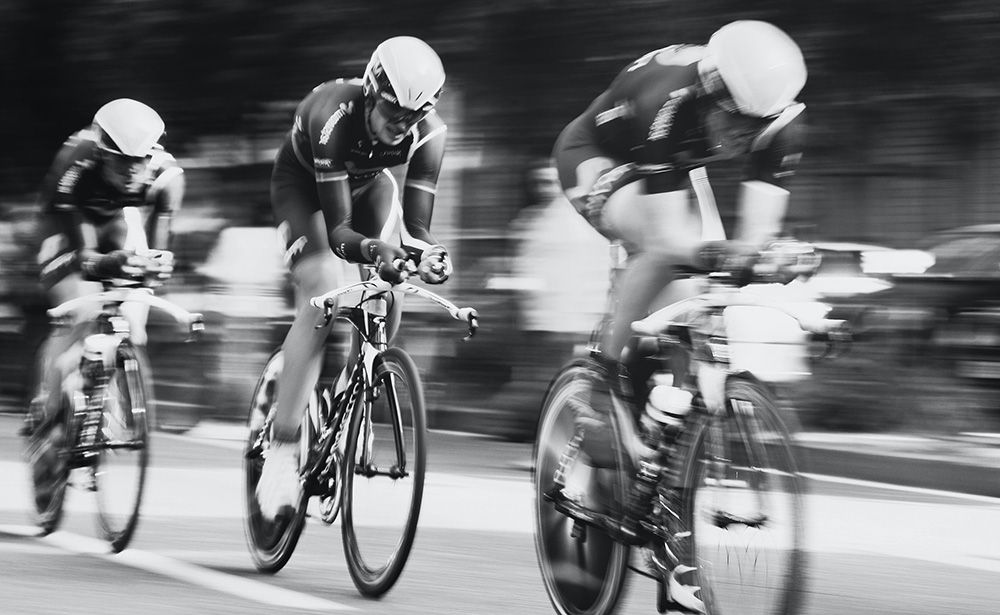 The thing about cycling, is that you need to put in a lot of training time on the bike. As with any athletic activity, if you spend a lot of time doing it, you’re going to end up with muscle imbalances.

What makes Cycling special as a way to create imbalance is that pretty much all the muscle action is concentric. That is, the muscles shorten as the act to propel the bike. At no point do they act and elongate at the same time. This leads to short quads, hamstrings, calves, and deep hip flexors.

This process takes place over a period of time and probably kind of creeps up on the athlete. It may not be a problem or even be apparent until an overuse injury begins to manifest.

A good yoga practice for the cyclist should take into account imbalances, help them with recovery which allow them to carry a greater training load and in the long, term prevent injuries.

Because the body is locked in this unnatural hunched position, there will be some muscle shortening, especially of the hip flexor muscle groups will become very short – namely the quadriceps, iliacus and the iliopsoas. The quads and iliacus will probably pull the pelvis into an anterior tilt. While the psoas will pull on the front of the lumbar spine either locking it into forward flexion in relation to the pelvis or just stiffening and compressing the spine. This will lead to lower back pain, and in the long run, by holding this position, there’s also a likelihood to develop disc problems in the lower back. 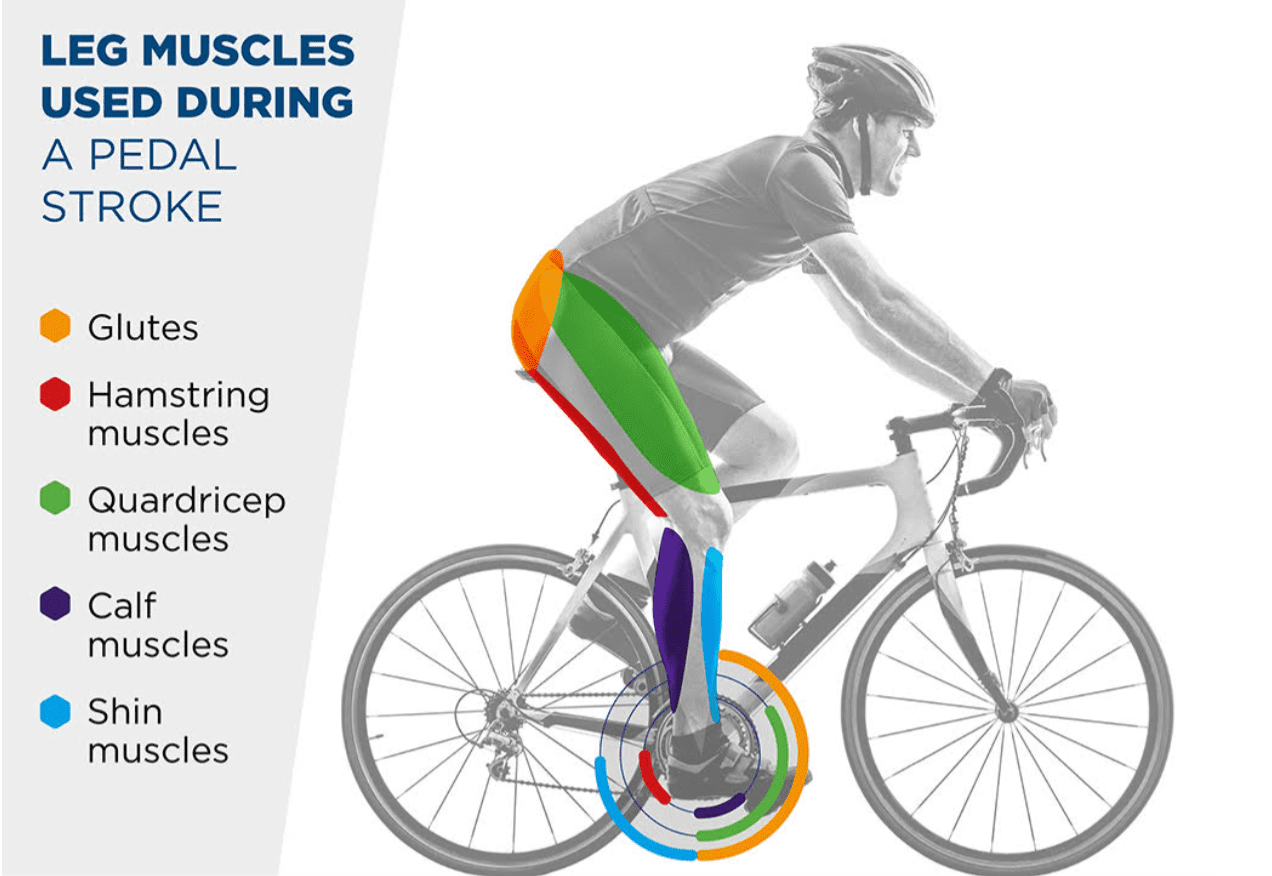 THE ANATOMY OF THE CYCLING POSITION 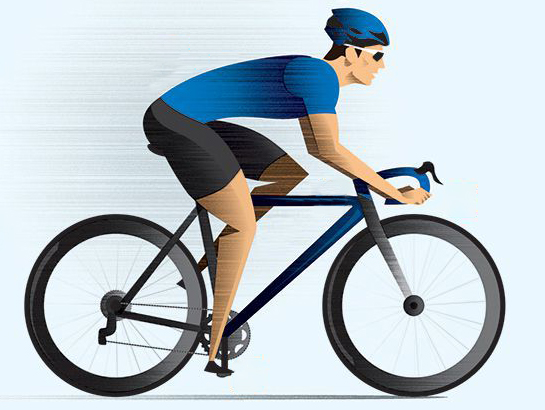 The head and neck

Because the cyclist needs to look straight ahead, the neck has no choice but to be in this extended position. The back of the neck is shortened. The shoulders, because she’s carrying weight on the handlebars, are forward and she is getting a tightness in the upper trapezius and the upper part of the neck extensors. This will lead to neck pain.

Remember that in a competitive cyclist this position is almost as normal as walking or sleeping. body is an adaptation machine, so the shape of a cyclist will be an adaptation to the shape on the bike.  In time, the cyclist will develop a locked short neck extensors. Muscles include upper trapezius muscle and levator scapulae muscle – these are attaching the scapula to the back of the neck. The occiput muscles, at the base of the skull, will also become very tight.

If we look at the skeletal posture of a cyclist, we notice the neck in the forward bent position with the eyes looking straight ahead along the road. The vertebrae of the neck have no choice but to be in an extended position.

The natural and healthy cervical spine posture would have the skull balanced on the neck with minimal muscular effort from these larger ‘global mobilising muscles’ has the chin tucked a little bit more and the spine upright without the extension of the neck or the ‘hunching’ of the shoulders.

Legs and lower back

Having a look at the lower body, the cycling action moves the leg from approximately just under 90 degrees flexion, to an almost, but not fully extended leg. There will be an adaptive shortening of the flexors and extensors that control movement of these joints. The legs will develop a particular strength. In terms of the leg position, the leg is not really quite straight at the bottom of the pedal stroke, it’s less than fully extended. At the top of the pedal stroke, the leg is also not fully flexed. It’s a little less than 90 degrees flexed. Therefore we can say that the leg muscles are developing to be strong, but in a limited and unnatural range of motion. Because of this the third main thing that cyclists suffer from – ITB tightness.

Most obviously, the quadriceps muscle group will be well developed and short. The rectus femoris (one of the quads) joins the patella with the front of the iliac crest, and tends to pull down on the front of the pelvic bowl, will be very strong. This isn’t a big problem, but another muscle group which connects the lesser trochanter with the transverse processors of the spine, we call these the hip flexors, will become very tight. When this muscle group becomes tight, either the leg pulls forward and up, or the lower part of the spine, or navel spine, pulls forward (arched lower back). Typically, people who cycle a lot therefore struggle to stand completely upright because of the tightness in the hip flexor.

The third point is about core strength. What happens with the cycling action, is that the legs are doing all of the work. If you’re hill climbing or mountain biking, it’s a little different – by pulling with the arms there’s a transfer of force through the body. However, generally speaking, the legs do most of the work while the trunk and the core do very little. To be a strong cyclist, you need a strong core, but the action of cycling does nothing to build that core strength.

To summarise, the results of this cycling position will be: neck and shoulder pain, lower back pain and ITB tightness, so the practice of yoga asana should generally try to offer some balance and relieve the short and stiff muscles. This will improve circulation, relaxation and the ability to breath well. What follows are just a few suggestions. It isn’t an exhaustive list of yoga exercises, but rather a selection of firm favourites.

Try to open the chest toward the feet and lift the hips high. Don’t worry about getting the heels down. It is a static stretch. First, push the hands down on the table about shoulder width distance apart, creating a 90 degree angle with the legs and torso. While pressing the hands down, start to drop your chest towards the floor, relaxing the head. This will open the shoulders. To go deeper draw the hips away from the table.

This is very similar to the wall clock stretch but it is on the floor. The scorpion is a good chest opener but may be a strain lower backs for some cyclists who have rigid hip flexors. But the fact that it uses the glute to lift the leg means that it is a perfect counter to tight hip flexors. Imagine a giant clock on the floor, Take the arm to 3 o’clock, then raise the opposite heel and try to lift the thigh without the hip lifting. This will actively find the end range of extension in the hip joint. Try to keep elongating the lower back as the leg goes higher and eventually drops over into a twist.
Then repeat with the arm pressing at 2 o’clock. 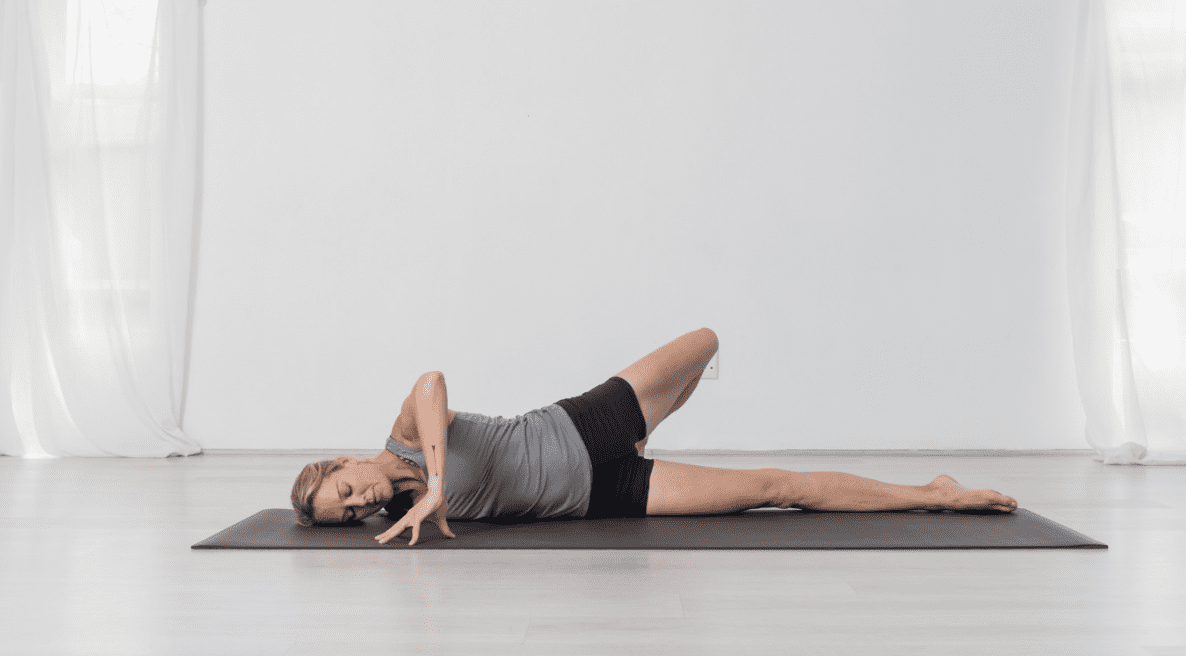 The pulling action of the arms here is a way to enhance the lateral ribs lift which comes from strong serratus anterior. The pull of the arms also gently tractions the spine in a mildly extended position.
In practicing this for Cyclists try to minimise the effort exerted by the neck and head by rather slightly tucking in the chin. This asana is also beneficial for the lumbar disks. 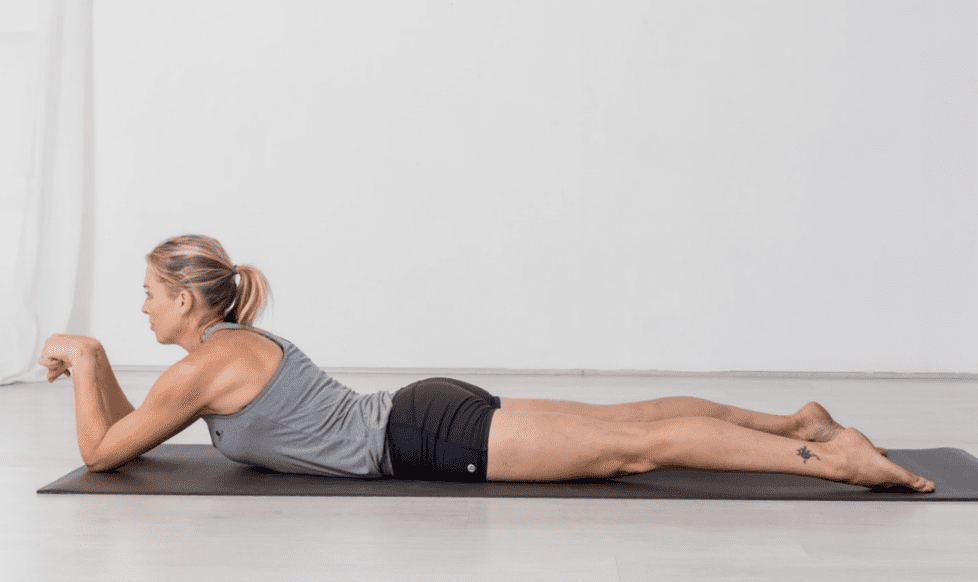 The hands hover and the elbows are drawn back as much as possible. This counteracts the shoulders forward position of the bike and trains the thoracic lift. Try to engage the whole backline. This position is also beneficial for any intervertebral disc compression but more active than the last. 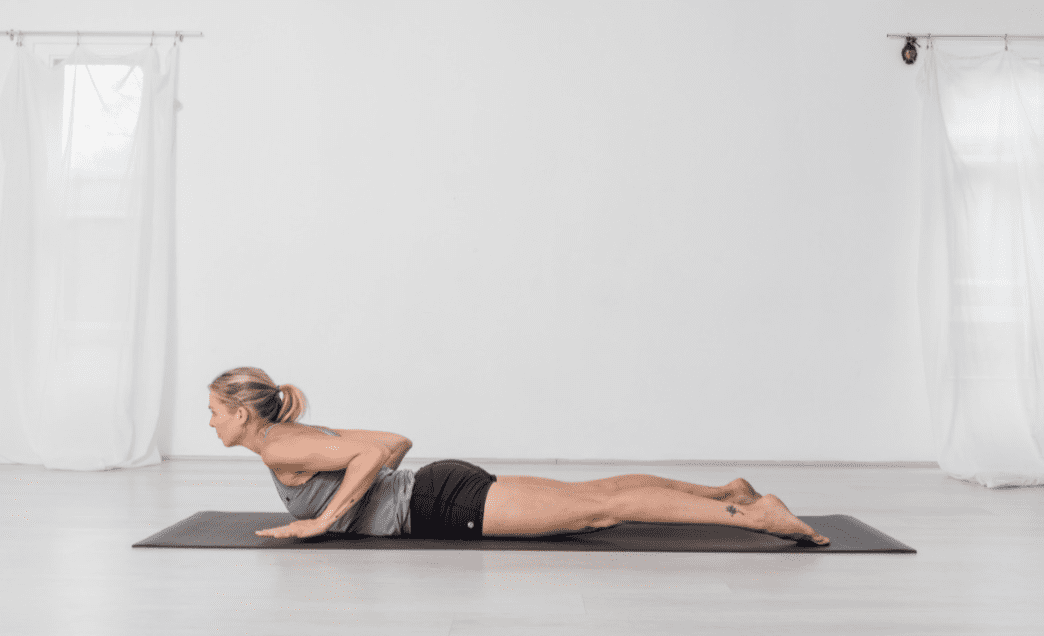 Position yourself on your back with knees bent almost above the ankles. Gently tilt the pelvis forward and back first.
Next, find the placement of the pelvis between the forward tilt and the backward tilt – this is neutral pelvic position. Enter the bridge from the neutral pelvis – pressing into the legs, lift the pelvis up and down a few times. Try to maintain the neutral pelvis. In this exercise we can alter the activation pattern of the pelvis and legs according to the needs.

Considering posture we recognised that each body will have its own movement pattern and we can modify and adapt each yoga exercise according to those needs:

This third technique is generally recommended as it creates a freedom in the hip joint and sets up healthy movement patterns in other places like walking. 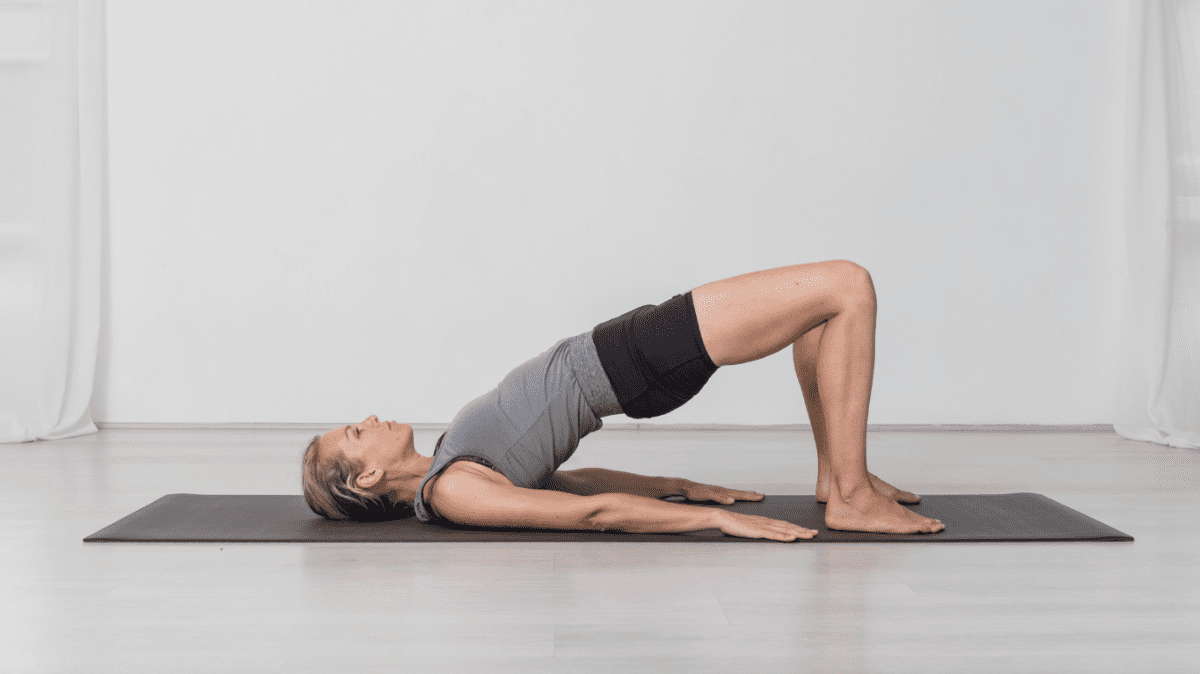 Less is more. Focus on fine control and high reps rather than big movements as this is to wake up intrinsic stability musculature of the spine of the spine and trunk such a TA, internal oblique, multifidus, rotadores, and intertransversarii. Grip armpits toward the hips and keep a neutral spine. It doesn’t feel like much is happening but waking up deep stability doesn’t always feel like much. This will help to relax global muscles. 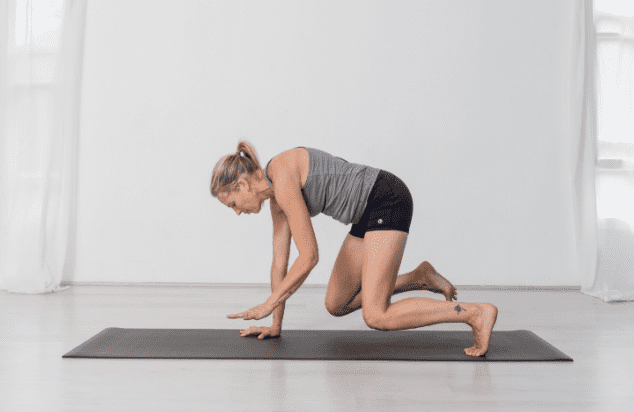 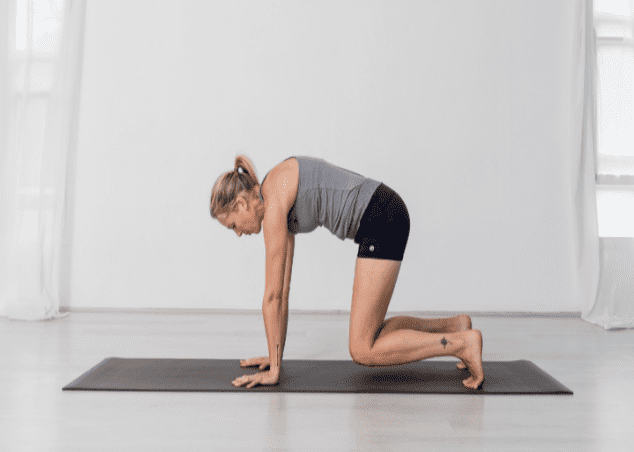 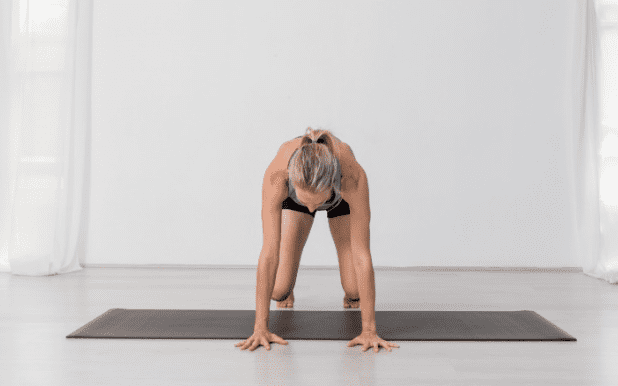 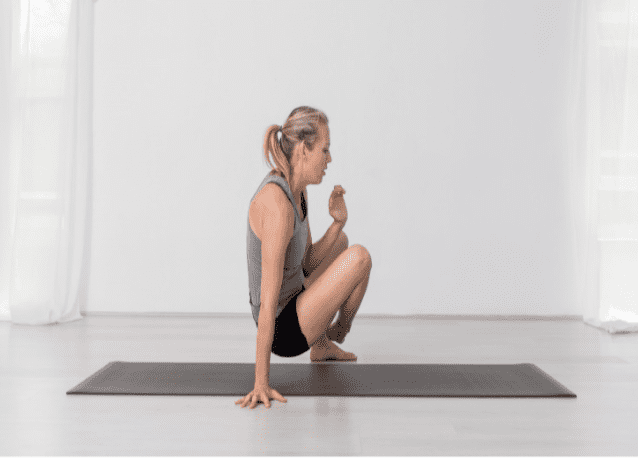 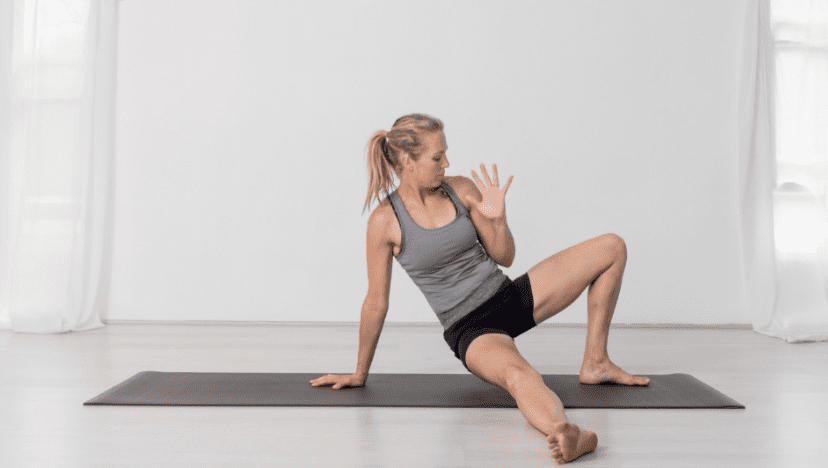 This exercise demonstrates very specifically what happens when the external core cylinder is weak, and the deep hip flexors are tight – a common problem area for cyclists, as discussed previously.

Try to maintain a lift of the back ribs and a connection drawing the armpits to the hips this exercises and thoracic mobility in rotation which is lacking in road cycling. 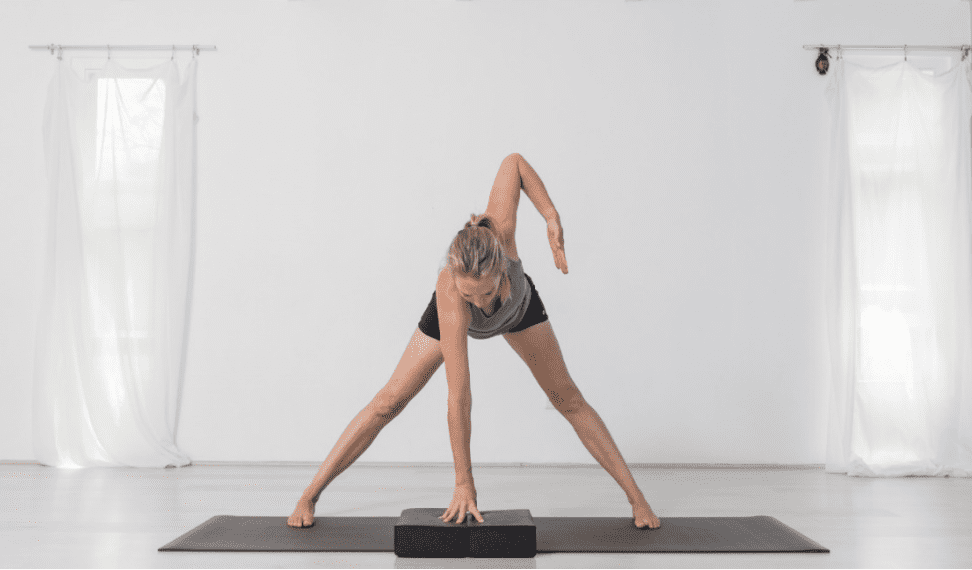 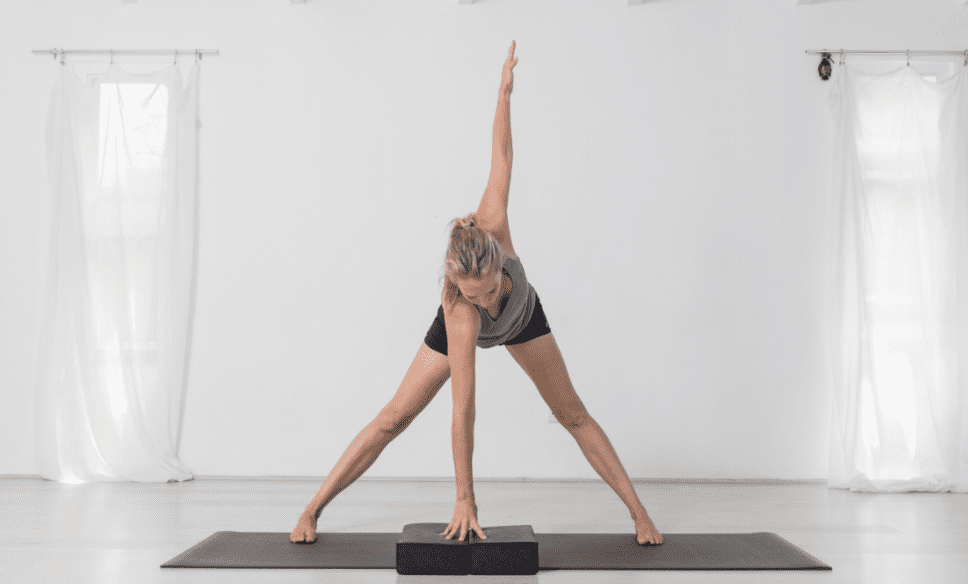 These are low effort yoga exercises that help to mobilise and increase the circulation perfect for hard training or competition days. 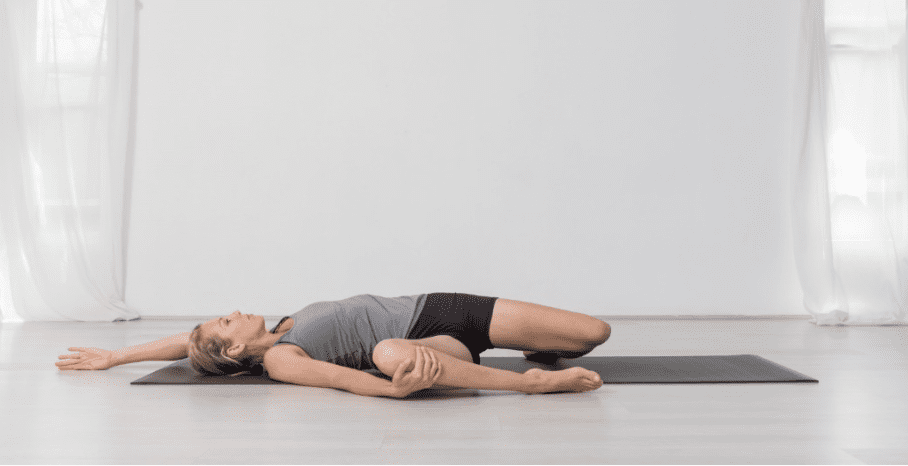 As a rule of thumb, every yoga practice should include some pranayama. You might think it’s not difficult to breath, but there’s a lot of scope in using yoga breathing techniques in athletics (and cycling). If you can develop the ability to breath with more control this will help you when you get to difficult parts of your race or your training. There’s a simple technique called the ratio breath, where we make the in breath half the length of the out breath. It works like this: you breathe in for two and out for four, or in for 3 and out for 6 etc. Start from a normal, easy breath (approximately 3 seconds). Then count your inhalation for two seconds and breath out for four seconds – take about 4 breaths like this at first then return to normal breathing.

When we lengthen the out-breath in relation to the in-breath, the actions of the parasympathetic nervous system is enhanced. It brings you a calm and relaxed state almost immediately. This could be quite useful before an intense event, or as an athlete when you feel that you need to relax more. Putting yourself into this relaxation state by the intervention of yogic breathing will change your physiology. The heart rate and blood pressure drop and inflammatory markers are reduced. 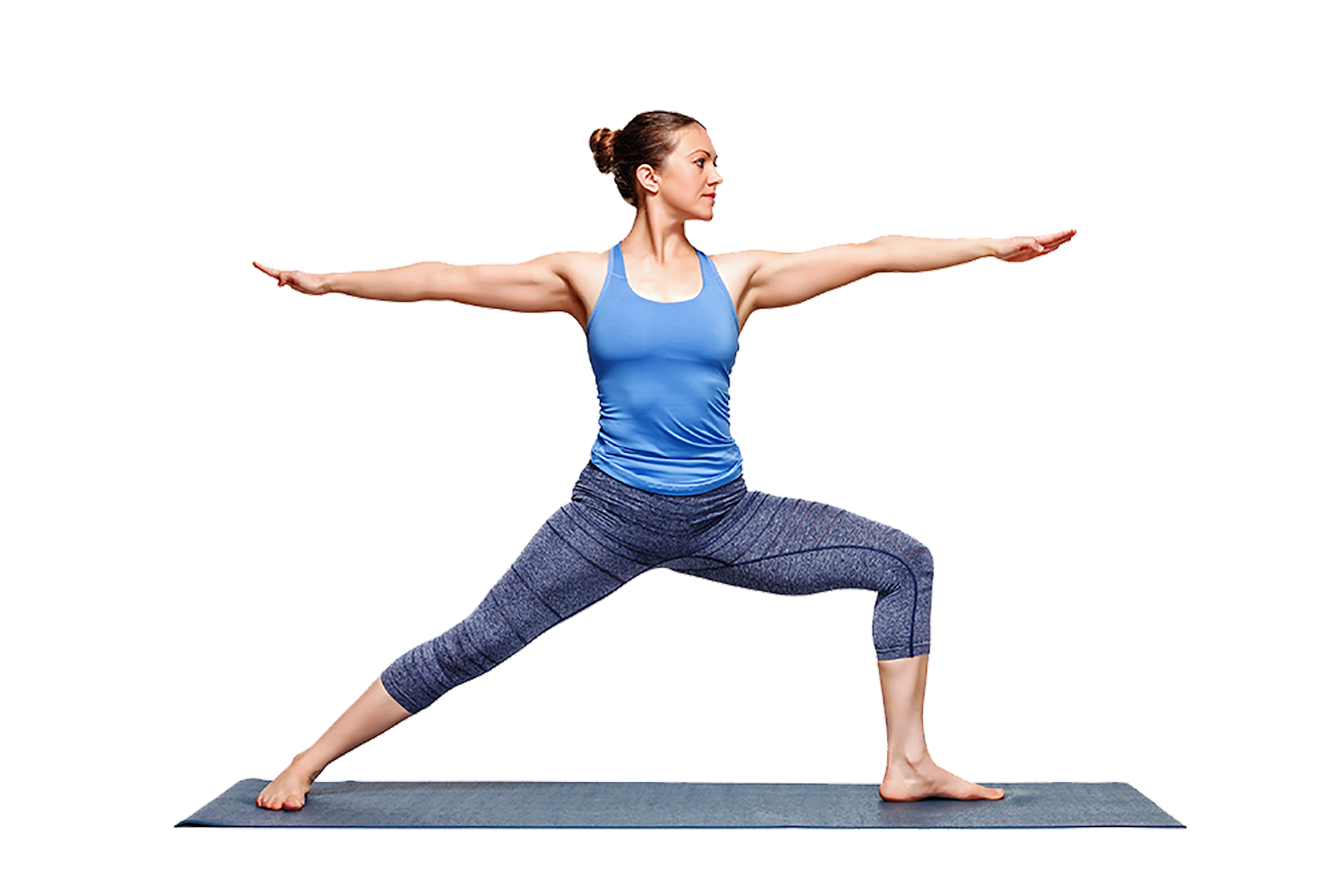 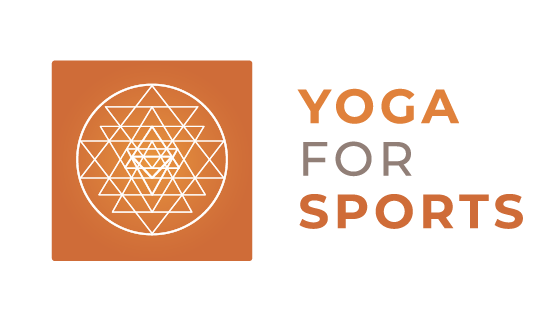